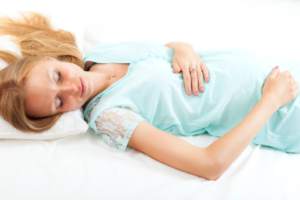 Every woman is different, especially when it comes to pregnancy. Some women experience the early signs of pregnancy even before noticing a missed period. Other women may not detect anything different until they visit a gynecologist because of menstrual delay. Many of the early signs of pregnancy, such as headaches and lower back pain, can mimic other health issues. If you have been sexually active, it’s best to err on the side of caution and take a pregnancy test or visit a local women’s clinic . Gynecologists often see women who experience the following symptoms.

Early on in your pregnancy, your hormone levels will change dramatically . This leads to symptoms such as morning sickness. Many women find that they can relieve nausea and vomiting in the morning by nibbling on a few plain crackers. Gynecologists recommend keeping a package of crackers on the bedside table and eating a few before getting out of bed. Smaller, more frequent meals may also alleviate nausea.

Nausea may also be triggered by a heightened sensitivity to odors. Many women become hypersensitive to odors that they previously found unpleasant, in addition to previously pleasing odors such as perfume.

Food aversions are an easily recognizable sign of pregnancy. It’s quite common for women to gag or feel nauseous when exposed to strong cooking odors. For some women, simply opening the refrigerator is enough to bring about a gag reflex. If your food aversions are intense, you may wish to ask your partner to cook while you step outside for some fresh air. Choosing bland foods may also help.

As early as the first week after becoming pregnant, excessive, unexplained fatigue may set in. Your gynecologist is likely to recommend getting more rest, rather than increasing your caffeine intake.

If you’re not ready to have children, you can evaluate your abortion options with the help of a caring gynecologist.Washington Surgi-Clinic provides safe, affordable abortions to women in Washington D.C., and throughout Maryland and Virginia. You can connect with a gynecologist by calling (202) 659-9403 or by visiting our website.